Home » About Us » Testimonies 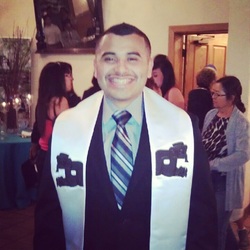 My name is Bryan Angel Rodriguez and I started smoking marijuana at age 11. My parents were always working to provide financially for the family, so they gave my sisters and I very little care and affection. I started smoking marijuana with neighborhood friends in South Central Los Angeles. The truth is that I started smoking because I wanted to be accepted by my friends. We were skaters and every time we skated we also smoked marijuana. In seventh grade I started to hang out with some classmates who were “taggers”. I remember that around age 12 or 13, my dad caught me using marijuana. He confronted me about my use and I promised that would stop, unfortunately I continued with my use.

Upon entering High School, I joined a graffiti crew, we smoked, wrote on the walls, and we fought with rivals.  After my sophomore year, my mom afraid that I would join a gang sent me to school Marshall High School.  Contrary to my mom’s wishes, I only got worse; I started hanging out with gang members and began selling marijuana.  This led to a daily consumption, expect for weekends.  Also, during this time I became a teen-age dad, but did not stop consuming drugs, I graduated from High School but things did not change.  I continued smoking for two years until my parents forced me to enter an outpatient program, it helped me for a few months but I relapsed.

Finally my parents told me I had to attend a retreat for men (ENCUENTRO) with Prevencion y Rescate or I would have to leave their house. My parents had reached their limit and if I did not change, I would be on my own. On the day of the retreat, I sat next to another person going through my situation, he offered me marijuana and when we got to the mountains we smoked. I was certain this retreat would not help me, until I heard William Portillo preach, something inside me told me I had to change my life. The ENCUENTRO EXPERIENCE was great. I cried like a baby for four days. During the retreat weekend I made a firm decision to change my life. During the closure of the Encuentro, all the men who had participated danced and praised God for what He had done for us. When my family saw me, they could not believe that a miracle had happened.

After the retreat, I became involved with Prevencion y Rescate, I attended family assemblies, self-help workshops, and 12 steps. My first month of stopping marijuana consumption was the most difficult. I had to smoke cigarettes to deal with my anxiety to smoke pot. After my first year of sobriety, I volunteered with Prevencion y Rescate’s ENLACE program as a mentor. With the help of Prevencion y Rescate, I obtained a scholarship to pay for my studies and started attending a local Community College. On June 16, 2012 I graduated from Cal State Los Angeles with a Bachelor’s degree in Sociology and Certification in Human Resources. On September 2013, I began my Masters in Social Work (MSW) degree Cal State Los Angeles. I am thankful that I have been 6 years and 6 months without the use of marijuana. It is true Christ works miracles!